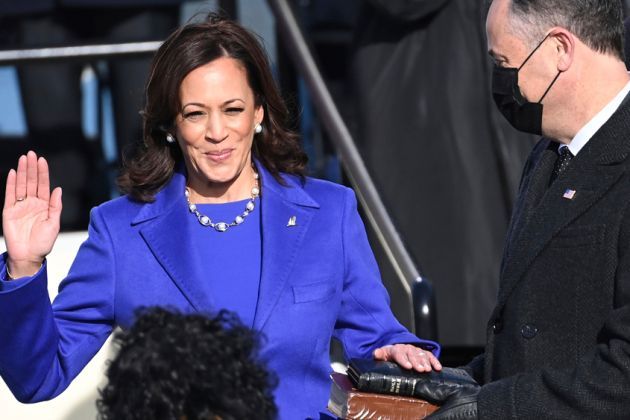 In Celebration of VP Kamala Harris

I just witnessed Justice Sotomayor (the first Latina Supreme Court Justice), administer the oath of office to Vice President Kamala Harris. I was sitting on our couch with my son (who is 11 and is white and male) snuggled next to me. I was in tears at the moments as she completed the oath! What a moment! The impact and value of this historic moment only magnified by the past four years – and even more so by the past 10 days. I am grateful and moved beyond words that we can now say, with my son watching, we have an African-Indian woman Vice President. As a fellow Howard University alumni there is also some “Bison pride” in my reaction to this moment!

I know that for girls across the US, or my nieces, and God daughter, and for the black and brown daughters of my friends in my community and in the world, this moment is profound!  There are not words for the meaning and value in being able to finally and actually see the possibility of being a female and/or black/and or Indian Vice-President or President. It has taken far too long for us as a nation to finally get here; but at this moment, we are here. As so many others have declared “if she can see it, she can be it.”  While its clearly not impossible for people (in this case women) to envision possibilities for themselves without actually seeing it, actually seeing these possibilities makes the envisioning so much easier and makes is that much more possible and achievable.

As the father of a white boy, I also want to shout out to the meaning for him of seeing a black-Indian woman as Vice-President. I say this out loud with some caution, as I in no way mean to take away from the power, significance and deep meaning of this moment for black, brown, Asian, Native, Middle Eastern and LatinX girls and women.

I want to acknowledge and celebrate the significance and deep meaning for our white sons as well. For Kiernan to see a black Asian woman in such a position of power and authority – a position of power and authority relative to other men – is as valuable for him to see (in different ways) as it is for black and brown girls. On the soccer field, he’s had days where girls on his team, or girls on a different team were better than him. He’s not experienced this as some kind of assault on his masculinity, but rather a team-mate or opponent who simply “had better game.” Witnessing a black-Indian woman to the 2nd most powerful position in the US, and one of the most powerful positions in the world, is an awesome moment for him, and the next four years hold tremendous promise. For Kiernan to see President Biden (to the degree that he does) work alongside VP Harris in a way that honors and values her inputs, leadership and perspective centers, for him, the power and value of black women leadership. This is a breathtaking opportunity for my son – for all our sons!

And, to see her doing so in a way that acknowledges and lifts up the black, Asian, Native, LatinX, Middle Eastern and white women who worked so hard for so long in order for her to be in this position. She openly acknowledges that she did not get here of her own volition that she is walking along a path that has been paved (to the degree that it is) by other women; and is littered with the bodies of some of these sheroes.

He is seeing, for real, that being white and male does not mean that being Vice-President or President of these United States is a birth-right!. He is seeing that all of us have the capacities to serve. It also provides us a differently concrete opportunity to talk with him about why it’s only now, 245 years after the founding of our country, that we’ve had anything other than white men in both positions of power and why she is still one in a sea of whitemale faces in formal positions of power in Washington. We can continue, and more concretely, talk about the structural and institutional forces that make it so much harder for women, for black and brown people, and for black and brown women to achieve positions like Vice President.

For me, as a man and as a dad, witnessing Ms. Harris become vice-president, is another call to action. I have a personal role to play in acting in support of Vice President Harris!

It is also a call to action for me, as white, a man and a whiteman living and working in a social-political environment that encourages and promotes my acting out of selfishness, self-centeredness, and self-servingness. This is one of the central pillars of white supremacist patriarchy – I am (or should be) the center of it all! I have internalized these lessons far deeper than I like to admit and continue to struggle regularly on challenging my self serving tendencies. The call to action that I experience as a result of bearing witness to Kamala Harris officially becoming vice president, is a call to continue working on my own self; while also working to dismantle the structures of white supremacist patriarchy. The call to action I experience also calls me to join with my son in this journey and these efforts!

In his inaugural speech, President Biden called on us to “listen to each other.” While there is certainly value in this, our white supremacist patriarchy has required women, black and brown folx, and black and brown women have been required to listen to me (or other whitemen who look like me). We don’t need to listen to each other, we as white people, as men, and as whitemen need to listen, not seek to be listened to. The call to action that I experience from Ms Harris inauguration as VP is for me to more often, more intently, and more overtly listen! And to do so when my son is watching.

In our household, we try to model a practice of living that centers compassion. Compassion for others as a driving force that leads us to live our lives, make our decisions, practice our faith in the ways that we do. We strive to intentionally use compassion as a “north star” for our everyday decisions and action. For our white son to have the experience of witnessing the strength, grace, and wisdom of a black Indian woman in a position of authority and power will help in our efforts to raise him up to value and hold up the strength, grace and wisdom of people of all genders.

Gender Matters is produced and distributed by Rus Funk Consulting – offering a range of services, training and TA to work meaningfully with men and boys to promote gender and racial justice. If you find this post of value, please consider sharing it through your social media outlets (http://rusfunk.me/2021/01/20/celebrating-vp-kamala-harris/)